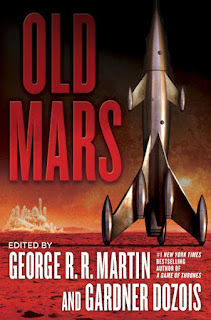 This needs a lot of work. It's actually a first draft of the beginning of a much longer story I want to write. It's the first piece of fiction I've written since I've started this project that I'd eventually like to see published. No, it's not inspired by the recent film The Martian (2015) based on Andy Weir's novel (and I've yet to read the book or see the film). I actually got the first germ of an idea for this story while reading Old Mars, an anthology of short stories edited by George R. R. Martin and Gardner Dozois. It's a collection of stories about the Mars I remember from childhood, the Mars that had canals, a breathable atmosphere, and a much greater hope of life on the planet, including maybe intelligent life.

I need to change a great deal about even this small beginning of my larger story. I haven't done a lot of research into proposals regarding human exploration of Mars. Although I'm fairly settled on the landing site, I still need to figure out how many people would likely be part of the crew of the first manned ("human-ed") spacecraft sent to Mars, how many would go down to the surface, and how long they would stay. I know exactly why Amanda is there, what she's looking for, and what she ultimately finds, but the other crew members are only cardboard cutouts so far.

Since I have actual plans for this story, I've added a brief copyright statement to the footer of this blogspot and ask that you respect my right to own what I've created and not copy any part of it for your own use, particularly for publication. I'll probably create a different title for it as I expand the story line, but for now it remains "Arabia Terra."

Oh, in case you're wondering if the following has anything to do with the exercises I've been working through in Josip Novakovich's book on fiction writing, chapter two is about location. Hopefully, I've started to craft a compelling location in the Arabia Terra region of Mars as we may see it a few decades from now. Enjoy.

Commander Amanda Nichols was disappointed as she opened the Mars lander's hatch and saw that her helmet obscured much of her first view of the upland region of Arabia Terra. Major Terry Shepherd, the lander's co-pilot who was standing behind her, always referred to most Martian terrain as "planet Nevada," but for Amanda, the stark beauty and even the romance of Mars far outweighed a more objective observation.

This is supposed to be one of the oldest terrains on the planet, heavily eroded and very densely crated, which is part of the reason NASA chose this part of the Arabia quadrangle as the landing site of the first human mission. There’s a distinct possibility of studying evidence of tectonic activity and even volcanism here, plus previous robot landers detected the likelihood of ice water under the surface.

To Amanda, the landscape before her looked like God had taken the ancient red crust, rock, and dust in her field of vision and etched, crumpled. and then pounded it, creating a texture and fabric that spoke of a life lived long and hard resulting in a face marked with character and and even a hint of majesty rather than merely scars and age.

A disembodied voice mixed with faint static coming from her helmet speaker reminded Amanda that she wasn't there to admire the scenery, at least not exclusively. "Copernicus One to Mars Lander Ares, confirm that you are EVA, over."

Captain Robert McCarthy, the third person on the crew, and the one tasked with staying aboard the main ship in orbit was probably getting impatient. She and Terry only had 72 hours on Mars before they had to return to Copernicus, and with their resources being precious and limited, there was no time for any delays in the surface portion of the mission.

"Acknowledged, Bob," she replied a little louder than she intended. "Hatch is open, I've got a wonderful view looking west over Arabia Terra. Beginning my descent down the ladder."

"Beginning of descent acknowledged, Ares. Everyone back on Earth is waiting to hear about the first human presence on Mars," chirped McCarthy.

Terry didn't say a word but she felt his heavily gloved hand press on her right shoulder from behind. For all his teasing about her over attachment to the planet, he knew exactly what this mission, her being the first person to set foot on the Red Planet, has always meant to her.

Amanda took a deep breath which was no doubt audible to not only her crew mates, but would be heard by everyone watching and listening on the television sets once the video and radio signal made the approximate 13 minute transit back home.

Her sense of wonder had been rapidly replaced with the startling grandeur of this moment and her personal responsibility as first astronaut to walk on Mars. Amanda began her slow and careful climb down the side of the lander, realizing that she was not only on the cusp of fulfilling the human dream of visiting another planet, but also her personal dream; her Grandfather's dream. She swallowed hard at the memory of Pop-pop, (that's what she called him when she was four...before she learned to say "Papa") and found that actually being on Mars made her remember him more than she thought. Of the millions of people waiting to see the transmission from her helmet's camera of the first human bring to step on another planet in our solar system, she wished he could be one of them.

Amanda welcomed the return of gravity, no matter how faint, as she neared the scarred and pockmarked red stone just a meter beneath her feet now. She tightly gripped each metal rung as she lowered herself, one hand, one foot at a time. Finally she was at the bottom rung and she extended her right leg and her booted foot, isolating her flesh from the astonishing cold, the near vacuum, the "alien-ness" of the environment, and stepped down onto the Martian surface.

Mission leader and Naval Commander Amanda Juliet Nichols had just made history. She put her other foot on the ground, let go of the last rung of the ladder, and turned to face Arabia Terra as the first living being (as far as anyone knew) to walk on this world.

"As I step onto our sister planet Mars, I am not alone. All humanity is here with me in a spirit of peace and hope as we extend our reach to other worlds, and one day, to the stars." She had rehearsed that statement for weeks knowing a watching and listening Earth would expect the first words spoken by her to be something profound and uplifting. She hadn't been born yet when Neil Armstrong set foot on the Moon, but she listened to the recording of his first words and hoped she could inspire the same awe in the people of her home world as she now carried the same torch borne by the space pioneers from generations before.

But in her heart, she had more to say that the world would never hear and maybe never understand, "I came to Mars for you too, Pop-pop. I wish you were with me. I miss you."

Behind her, to the east and south, as Terry was just starting to climb down the lander and join her, Amanda and the Ares lander were majestically framed by rugged rust-colored ridges climbing four kilometers into the pale blue Martian sky.
Posted by james.pyles at 1:32 PM